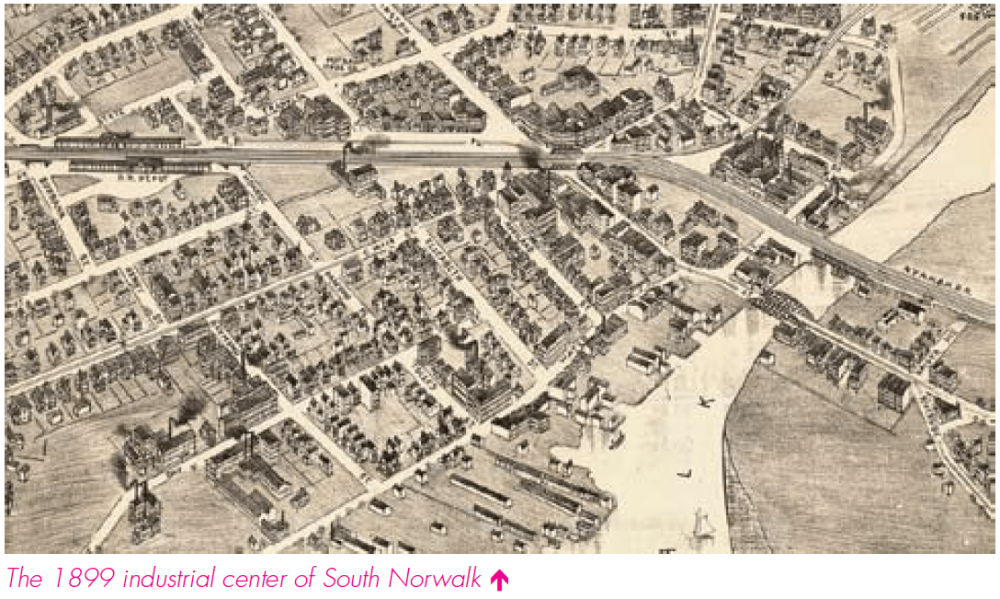 By the middle of the 1800s Norwalk became a stop on the New York and New Haven Railroad line. The spur up to Danbury was quickly added, and the South Norwalk train station quickly became a bustling center of commercial activity. The area around the station became known as Whistleville, due to the frequency of trains chugging through the largely immigrant neighborhoods.

The factories of South Norwalk were the draw. Work in the textile industry attracted Hungarian and Italian families to the area. From hats to oysters, the Norwalk harbor gave port to the world and manufacturing brought a population influx.

By the early 1900s, Norwalk had six hat factories, two shirt factories, the largest oyster producer in the country and the rails led the way.

The railroads led the industrialization.

Norwalk soon developed a manufacturing base of locks, hats, shirts, and corsetts to its many river-side factories.

The finest Oysters in the world come from Norwalk.

“Yes’m, I should know, I take a train up from Harlem to come here and select blue point oysters. My cousin, he works at Talmadge Brothers shucking Oysters, he does. I select the finest and bring them back to Minton’s Playhouse, where I work. The chef knows I’ve got family here, and that’s why I get sent. I sit in the back carriage with my boxes on ice, hoping there isn’t a delay. When we pass through New Rochelle, if the weather is right I can see the oyster boats doing their business dredging Oysters.”

For more about the history of Norwalk, check out the public art project by Duvian Montoya.