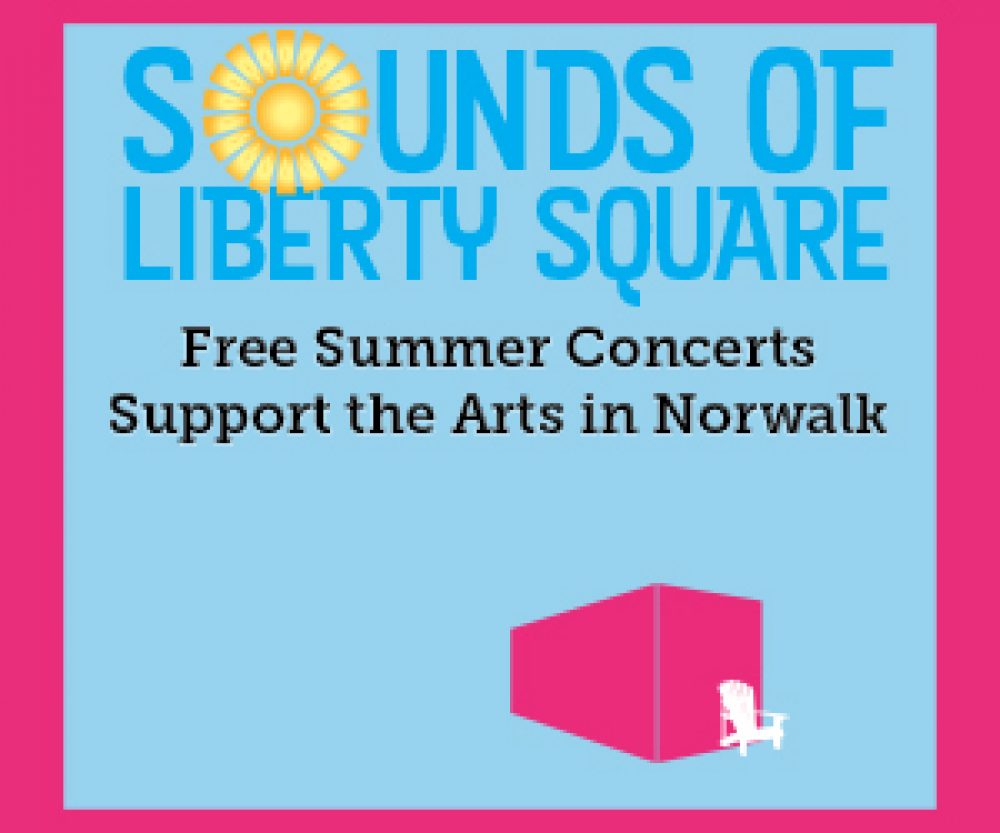 Summer won’t last forever, and when it’s cold and dreary out, don’t be one of those people who wish they could be lounging on a grassy hill listening to live music. Come over and enjoy the Sounds of Liberty Square music concerts at the Pink Containers in Norwalk.

Bring your chairs, blankets, and coolers for a summertime outdoor concert with your friends.

Weather and parking information is at norwalk2.org.

Experience the sounds of Woodstock at this tribute the Summer of Love with CJ West and the Downtown Train. The Sounds of Liberty Square is an outdoor concert series in Norwalk, CT. The music starts at 7 pm, but come early to grab your spot on the lawn, BYOB, bring your chairs, blankets, beverages, snacks and bug spray!

Constitution Park is located in Liberty Square, at the foot of the Stroffolino bridge as you head into SoNo. parking is available (50 cents an hour) in Liberty Square, or Free parking across the street in Veteran’s Park if you are a Norwalk Resident, or dine in SoNo and park at the IMAX parking lot.

CJ West and The Downtown Train plays country, rock, rhythm & blues and “whatever!” They LIKE so many different styles of music, it would be a shame to limit what they play to one genre. The Downtown Train plays kickin’ country music, classic and modern. Most of the band has rock and roll roots so mixing that in was a no-brainer. Then…..there’s a lot of great other stuff out there…..and decades’ worth! CJ West and The Downtown Train is always taking you somewhere! Sometimes they take you to summer country concerts, line-dancing parties or redneck weekends. Other times, they mix up a whole brew of music to keep everybody dancing. Lately, The Train take crowds to Woodstock, a tribute to the bands who graced the stage at Woodstock 1969. Whatever trip they’re taking you on, The Downtown Train’s talented instrumentalists and well-blended voices add up to a unique, danceable and fun musical experience!

Patti Rothberg returns with her coffeehouse vibe and hits from the 90s.

Patti Rothberg’s recording career goes back to 1996, with her debut on EMI Records, ‘Between the 1 and the 9’, which refers to the time she spent performing in New York City’s 14th Street subway station. The title track relates some of her experiences when EMI executive discovered Patti performing there. Seemingly overnight, Patti Rothberg achieved the kind of worldwide success one could only dream of. Critically acclaimed, Between the 1 and the 9 was an instant hit, and remains a timeless classic. The success of Between the 1 and the 9 had Patti touring quite non-stop from 1996 through 1997, and into 1998. She toured the USA supporting the Wallflowers, Chris Isaak, Midnight Oil, and Garbage, and she toured Europe supporting the Black Crowes. Patti and her band performed on Late Night with David Letterman, The Tonight Show with Jay Leno, and she appeared on the Oprah Winfrey Show.

The MIKE CUSATO BAND delivers infectious, high-energy alternative rock hooks that pull you in from the first few notes, make you move, and leave you wanting more. The band clearly enjoys themselves- from the hard hitting drummer, to the simple and sincere guitar work, to the melodic and edgy grooves woven with thoughtful lyrics delivered by the front man Cusato himself. Close your eyes and you’re reminiscent of your favorite chart-topping 90’s rock and alt bands….but open your eyes and ears, for it is clear, they are here to rock now.

The Pink Containers are two brightly painted shipping containers located in Constitution Park overlooking the Norwalk harbor. A gentle slope provides seating for picnics and hangouts while events happen at the Containers.

Glenn Roth is not your typical commuter from Connecticut. Instead of a briefcase, he carries a gig bag. His workspace is the vaulted splendor of Grand Central Terminal or the tunnels and platforms of the New York City subway system. A literal “underground” sensation, Glenn is a licensed performer in the MTA’s “Music under New York” program, playing for the most distracted and demanding audience in the world: legions of workers rushing to jobs throughout the Big Apple. And his fingers work magic, creating a soundscape of compelling melodies that invite them to leave the cityrush behind on an aural escape.

Glenn is a fingerstyle guitarist, his thumb riding the bassline and the melody driving all. His compositions suggest multiple guitars, but it’s really just one guy, ten flying fingers, one instrument. All instrumental, Glenn’s songs suggest moods and narratives that compel the listener to fill in the details.

Can You Identify these Famous Cars?
Tavern on 7