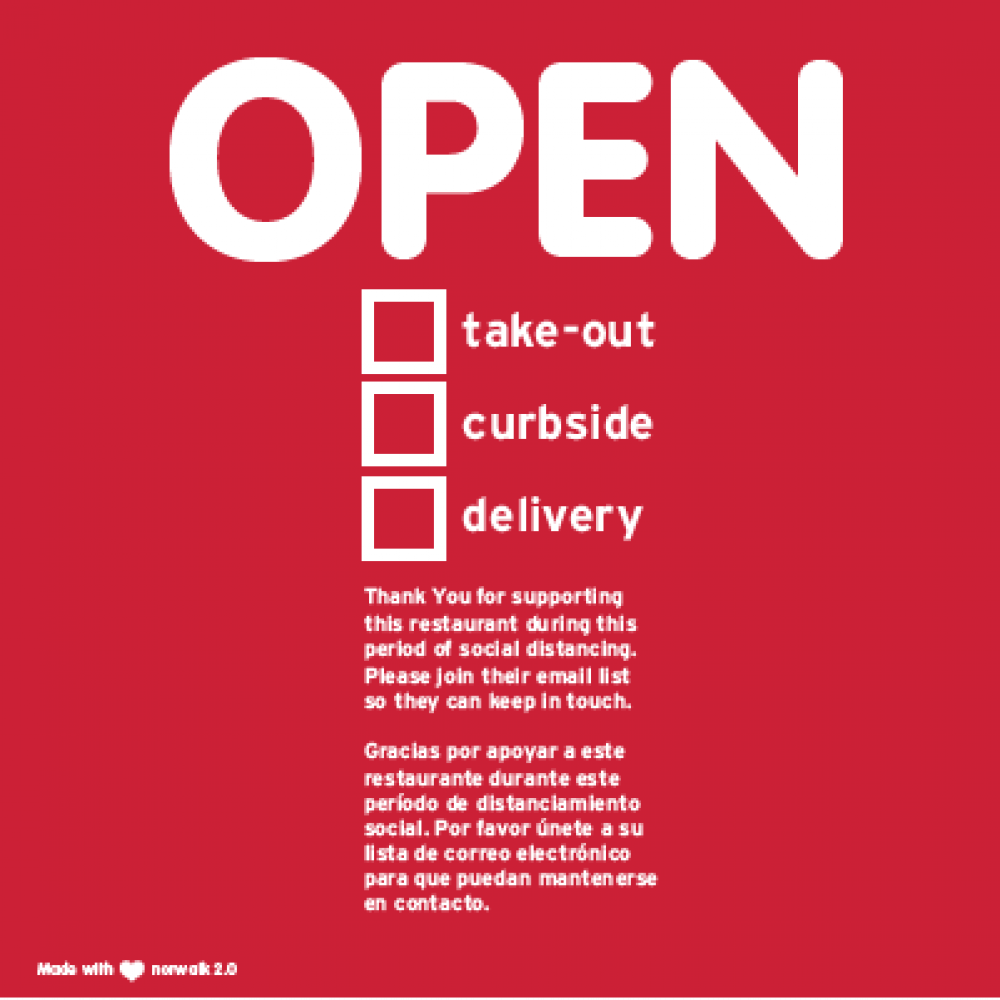 Saturday March 21, 2020. It’s a nice day out, the sun is shining, and the spring air is mild. In other times it would be a perfect day to be outside and exploring Norwalk. But today is the first day after Governor Lamont announced the stay home, Stay Healthy restrictions.

I spent the morning updating the restaurant list, emails were trickling in and people were offering updates via NextDoor. Norwalk has a great civic-minded community. I especially enjoyed the anecdotes about the owners of the small businesses that serve up food in so many ways.

One thing I’ve always reported on, when I’ve spoken about the importance of the arts and the creatives that live and work here, is how a dollar spent at an owner-run local business does more for the community and supporting Norwalk than you’d think.

I think I’ll write about some of those stories later. But today, as I drive around town delivering signs to the clusters of restaurants that were open, I became increasingly worried.

SoNo was filled with people out and about. I’ve observed SoNo through the years, and Saturday afternoon pedestrian activity has been increasing. There’s an irony that after years of convoluted redevelopment plans, this was finally a sign that people were coming back to spend time in SoNo. Or maybe it had to do with the suspended parking meter fees. There wasn’t an open spot on Washington or North Main St. But it was a weekend day, so it was a different experience from my usual one during the week when I work out of SoNo Spaces.

A few months ago, I had interviewed John John Barricelli from SoNo Bakery. We talked about the new apartment buildings and I asked about whether they were affecting his business. He said then, that the only time he saw increased activity was on the weekend when the apartment dwellers were home. Otherwise, he didn’t see them during the weekdays, mostly because they worked elsewhere.

But the worrisome aspect of seeing so many people milling around was that this really wasn’t the time to be doing that. I was a bit startled by the strangers who openly coughed and sneezed as I walked on the narrow sidewalks, and I couldn’t help but remember that a cough or a sneeze has a velocity greater than a Cat 5 Tornado. This was the casual community contact that you didn’t want to have.

Uptown, across from the Merritt 7 office complexes, Norwalk was a ghost town. Granted, the area wasn’t a walkable one. But there was a crew out working on something, a large mobile crane lifted some pipe segment with several conjunctions and valves that looked heavy. There were a dozen workers and trucks, along with the Norwalk police department watching something. They weren’t watching the traffic, there was hardly any, and the cones were unusually well placed and the northbound lane was reduced to one lane.

Online, the news reports from around the country provide snapshots of what is happening. Lots of pictures of empty streets and sidewalks, barren shelves and worried people in masks.

I didn’t see any masks, but I did see many worried people in the restaurants that I visited. Some hard their laptops out, busy doing the back office work and calculations. Others were waiting for the phones to ring, hoping enough orders would come through to justify staying open. The empty dining rooms and bars were a stark reminder that life had changed. But the people strolling outside were busy pretending that today was just another warm Saturday in March.

Here’s a video explaining why the best thing you can do to shorten the time we all have to be staying home with our small businesses shuttered is to reduce contact with humanity.

The better we stay away from each other, the sooner we can get things back to normal.