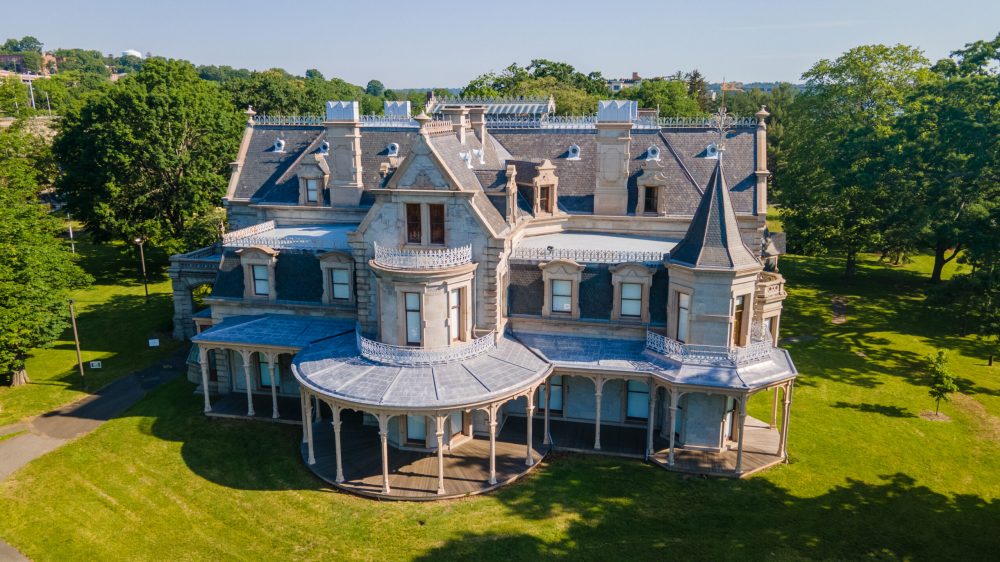 Just north of I-95 and on the northern boundary of South Norwalk lies the Lockwood-Mathews Mansion, one of Norwalk’s iconic attractions. Built in 1868, during a period known as the Gilded Age, the 62 room mansion once graced an estate with a commanding view of the Norwalk harbor and seemed destined to establish Norwalk as a retreat for the rich and famous. But fate proved otherwise, and from its very beginnings, the mansion drew some bad karma.

LeGrand Lockwood, started construction of the mansion as his “country cottage” in 1864. It took 30 acres of land acquisition and $2 million for Lockwood to have his 62 room stone cottage. His estate, now called Elm Park, overlooked his New Horse Railroad running up from South Norwalk, his Norwalk-Danbury Railroad which ran along the Norwalk River, and Oyster Shell Point. Lockwood’s view was the daily steamboat trade that connected Norwalk to New York City and the rest of the world.

In the spring of 1869 Lockwood was hoping to make a play for the controlling interest in rail lines to Chicago and therefore to California and the spectacular fortunes that would bring.

But a New York financier named Jay Gould and railroad tycoon Cornelius Vanderbilt were also focused on those rails. Gould and another guy, Jim Fisk, figured that if they could devalue the holdings of all their railroad tycoon rivals, they’d own the rails and so they sought to control the price of gold.

On a hot late August evening in 1869, Jay Gould had convinced Lockwood to merge Lockwood’s Lake Shore and Michigan railroad with another rail route from New York to Chicago.

While Gould was playing Let’s Make a Deal, Cornelius Vanderbilt was engineering manipulations of the stock of Lake Shore and Michigan railroad and got enough stock shares to gain two seats on the board. The result was the very first NYSE market crash.

With complicated partnerships and side deals in place, Fisk and Gould unleashed their gold play on September 20th, buying up as much gold as they could in order to drive the price of gold higher. They succeeded, but the market subsequently crashed when the federal government intervened.

By the end of September 24th, 1869, best known as the original Black Friday, gold speculators had been burned, but so had LeGrand Lockwood. Lockwood was forced to mortgage his estate in order to pay back his creditors. He sold his $10 million worth California Dreamin’ rail stock to Vanderbilt.

His mortgage on Elm Park was transferred under Vanderbilt’s control and in a scant 4 years, Lockwood died.

By 1874 Vanderbilt foreclosed on Elm Park. In 1876 it was sold to Charles D. Mathews for only $90,000. The family of Charles Mathews stayed on up until 1938. In 1941 the estate was sold to the City of Norwalk and the City dedicated the estate as a public park, though that’s not quite the end of the story.

It only took about ten years before City officials eyed the park as a good place to build a new government complex. Since the interior furnishings had been sold off over the following years, the City had used the building to store voting machines, lawnmowers, and tractors. Some rooms were even used for city offices, but a new City Hall with a fountain was waiting in the wings to replace the venerable mansion.

With the mansion under threat by a municipal wrecking ball, were it not for a group of fierce preservationists, the mansion would have been completely lost. Elm Park though was steadily chipped away at first by the construction of I-95, then by a 1950s era police station, then by the Route 7 connector, and recently by the addition of a children’s museum and playground.

It took until 1971 before the mansion became designated as a historic landmark. Since then, the mansion has been operated by a private not-for-profit organization that maintains the operation of the museum, and the City of Norwalk collects $1 a year in rent.

Tours are available from April through December, and the hours are generally posted on their website. The interior space has been refurbished and restored, offering a glimpse of the gilded age. Be sure to check out the library, with its hand-painted wallpaper, and the rotunda with its forty-two-foot ceilings and fine landscape paintings. You may recognize the rotunda from the remake of The Stepford Wives (2004.)